The average price paid for the month is 41.96 cents per litre. This is based on the average butterfat of 4.74% and protein of 3.94%, including SCC bonus and VAT.

Following the announcement of Mr. Seamus Daly as Chief Executive designate, the following appointments have been made to the management team with effect from January 1st, 2021.

We wish both Donal and Tim well in their new roles.

A new phase of the Carbery / Teagasc Joint Programme is starting in 2021. We are now looking for farmers who are interested in being monitor farmers as part of this. The focus of this programme will be demonstrating profitable, nutrient and environmentally sustainable, dairy farming.

As a monitor farmer you will receive advice on improving these and all aspects of your farming. If you are interested in being a monitor farm please contact Tim or Darren.

Willam and Dan Joe O’Donovan were national finalists in the 2020 NDC & Kerygold Quality Milk Awards. One of only 11 finalists shortlisted for the award from all over the country, everyone in Drinagh wishes to congratulate William and Dan Joe on their excellent achievement. The overall winner of the award was Richard Starrett from Lifford, Co Donegal.

The new agreement is similar in most areas to the existing agreement except for minor changes, namely the inclusion of the Drinagh/ Carbery Animal Health & Welfare Policy as a condition to collect and purchase your milk, the Volume Forecast which will be completed once for the duration of the agreement as opposed to annually and the inclusion of a note on General Data Protection Regulations ‘GDPR’.

In order to execute the agreement, you must complete and sign Schedule 1 including the volume forecast on page 12 and return the entire agreement to The Central Office by Tuesday, December 1st, 2020.

Richard Jennings pictured above with his family has been recognized for having the overall lowest SCC in Drinagh for 2019.

This is especially impressive as it is Richards second time having the lowest SCC in the Co-op, showing the level of consistency and excellence being achieved on this farm year on year. We would like to congratulate Richard and his family on consistently achieving such high standards in milk quality.

The Drinagh Pre-Calver minerals brochure 2020/2021 is included in this months accounts.

Contact your local branch or sales representative for special offers. 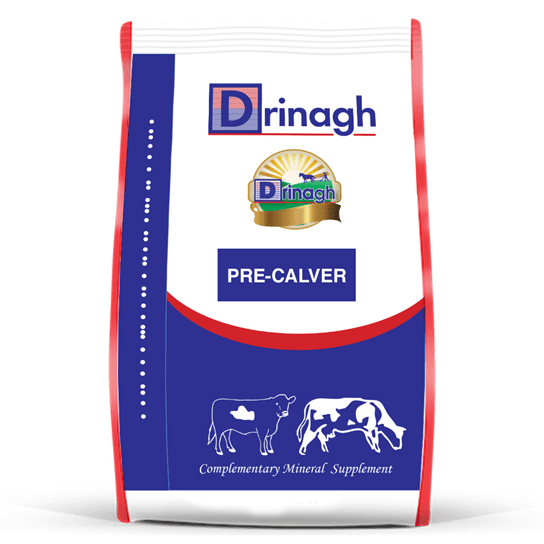 When it comes to drying off cows, is there enough attention to hygiene? Or is it a case of just get the job done, and breathe a sigh of relief when it is?

Bacteria can sneak in through the open teat end, especially in the early dry period......and they can also be welcomed in by the human, during the process of drying off! Cleanliness is crucial, and especially so if you are using teat seal only at drying off.