Urease is the enzyme in the soil that speeds up the conversion of urea to ammonium. It is during this conversion the ammonia gas is lost from untreated urea. The urease inhibitor moderates the rate at which urea converts to ammonium. In doing so ammonia loss is reduced to low levels.

Won’t a slowing of the conversion from urea affect the availability of N for the grass crop?

No, because the conversion of protected urea to ammonium begins as soon as the fertiliser granule starts to melt. The urease inhibitor moderates the rate at which the urea-N converts to ammonium. The result is that the conversion occurs over period of a few days rather than a few hours, as would be the case with conventional urea. Remember, when fertiliser N is applied to soil its aim is to supply the grass or crop with N over a period of days to weeks rather than hours.

No, published Teagasc trials conducted in different areas of Ireland have shown that the nitrogen recovery efficiency of protected urea and CAN are consistently the same (See graph 1.1 above).

Published Teagasc trials have shown that protected urea has 71% lower nitrous oxide emissions than CAN and ammonia loss is reduced by 79% compared to urea.

Can I spread protected urea throughout the growing season?

Yes, you can spread protected urea across the growing season at times when you would otherwise spread calcium ammonium nitrate (CAN) or unprotected urea.

Is there potential for protected urea to reduce nitrate loss to water?

Yes, during periods when leaching occurs nitrate present in the soil is vulnerable to leaching loss. Protected urea does not deliver N directly as nitrate to the soil, therefore reducing the risk of nitrate losses occurring with rainfall post fertiliser application. Reduced ammonia loss compared to urea will also reduce the risk of ammonia N being deposited from the atmosphere onto sensitive habitats or into sensitive water bodies.

The 2019 Pasture Profit Index (PPI) is an extremely useful tool when analyzing grass seed as it ranks grass varieties in economic terms. Each variety is valued on its overall contribution to net profit per hectare and is made up of key traits which drive profit including:

Seasonal DM Yield - presents the yield performance of each variety across spring, summer and autumn. Extra grass in the spring of the highest value in the index. Varieties with good spring and autumn growth are desirable to increase grass availability at these key points in your grazing season

Quality - indicates palatability and grass utilization. It is measured across the months of April, May, June and July. Quality is a hugely important trait which has the potential to deliver big difference at farm level.

Persistency - In the PPI, €0 indicates a persistent variety which is expected to last 12 years or longer under good management. Values of –€11, indicate that these varieties will not last over 10 years.

Choosing varieties with positive values for quality will help ensure you have a palatable mixture that will increase utilization, intakes and animal performance.
When formulating grazing mixture a blend of late heading tetraploid and diploid varieties are selected

The top two late diploids are:

The four varieties which make up the Drinagh D74 and Permanent Grazing mixes. Selecting only the best varieties will deliver the best grazing mixes on the market. 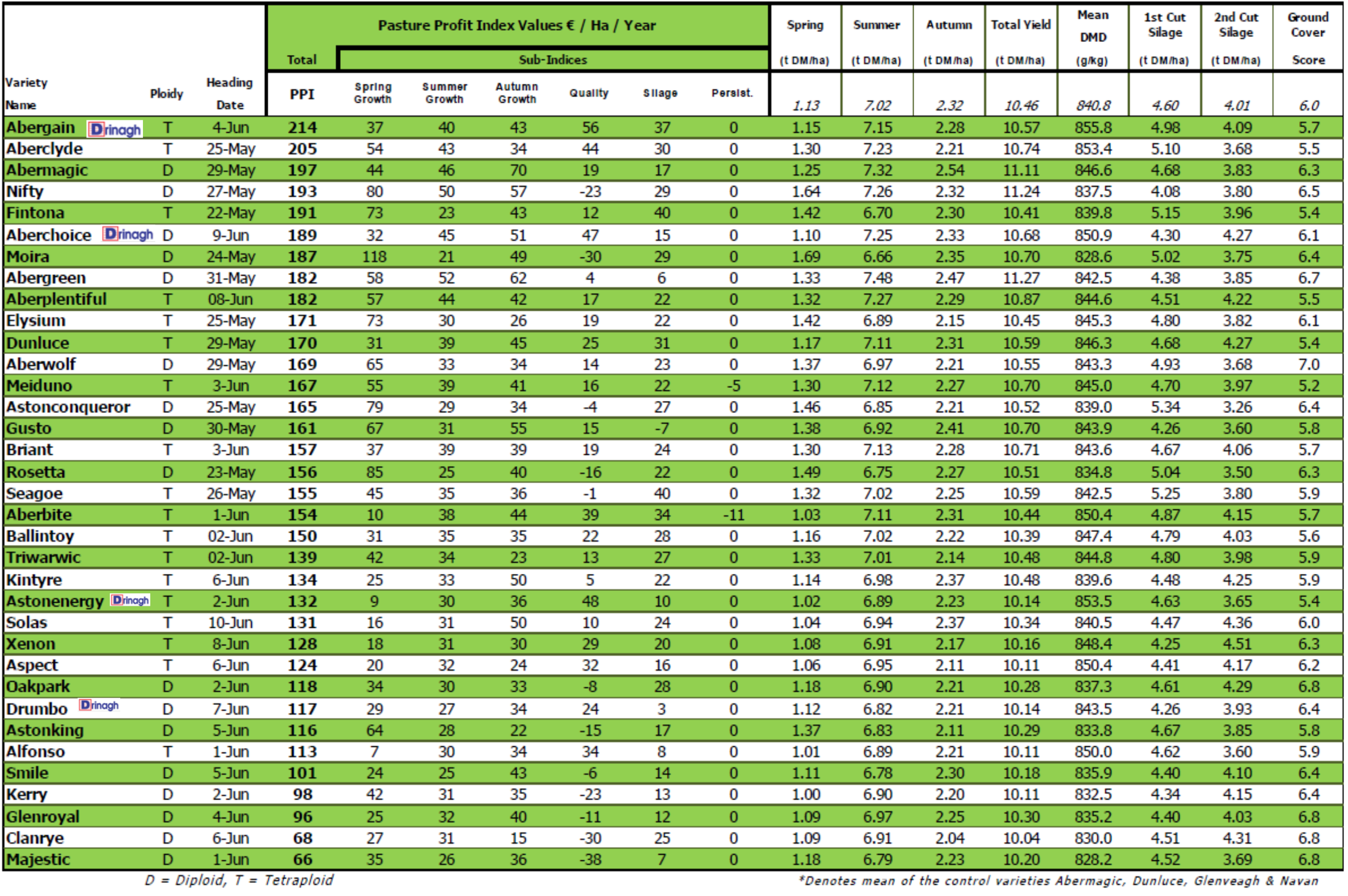