At the National CellCheck Milking for Quality Awards ceremony held in Dublin in late November, James and Anne Young from Derryclough, Drinagh were among the top 10 in the country in terms of lowest Somatic Cell Count in the country. Drinagh wish to pass on huge congratulations to James and Anne for their great achievement.

The first CellCheck Milking For Quality Awards ceremony was held in the Green Isle Hotel, Dublin on Tuesday, 24th November. The Award, which has been sponsored by the FBD Trust since its inception in 2014, is given to the 500 milk suppliers nationally with the lowest, weighted annual average somatic cell count (SCC) for the previous year’s supply, any supplier with at least 9 months of SCC results from one milk processor being considered eligible. The SCC range of the winners was from 37,000 cells/ml to 97,000 cells/ml. All 13 Co-ops that submitted data to DAFM have representatives in the ‘Best 500’.

Attending the Awards ceremony, Kevin Lane, CEO of Ornua, sponsors of the awards ceremony, said “The CellCheck Awards are a celebration of Irish dairy farmers’ ongoing commitment to maintain the highest global standards in milk quality. The hard work and dedication farming families demonstrate in delivering world class quality milk, day in day out, has enabled us to build successful markets for dairy products around the world. Ornua would like to extend our warmest congratulations to the winners and their families. They are role models who raise the bar for everyone in the industry.”

Finola McCoy, CellCheck Programme Manager who participated in the panel discussion, said “the winners of the Best 500 CellCheck Milking for Quality Awards are producing milk at a very high standard and they are to be commended for their achievements. Since the inception of the CellCheck programme in 2011, we have seen a marked improvement in the levels of SCC nationally, and this is due to the concentrated efforts of farmers and their Co-ops over this period.”

Simon Coveney, TD, Minister for Agriculture, Food and the Marine said “It is the quality of our dairy products that underpins the ability of this country to compete in markets across the globe. This quality comes about as a result of the hard work of dairy farmers and their family members across the country whose attention to the many aspects of hygiene and management that contribute to low cell counts deserves the recognition and support of all of us. I am particularly delighted to have had the opportunity this evening to personally meet and congratulate many of the farmers who are to the forefront of this drive for quality, and whose efforts have been rewarded by a place in the CellCheck Best 500 Awards 2014.”

During the ceremony, Minister Coveney announced the Top 10 suppliers nationally who achieved the lowest weighted average somatic cell count across all Co-ops. In addition to receiving their CellCheck Milking for Quality award plaques, these farmers received an additional award of a luxury food hamper, sponsored by Ornua. 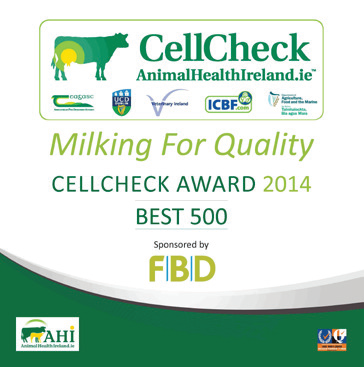 This is the second year of the CellCheck Milking for Quality awards. The award is given to the 500 milk suppliers nationally with the lowest, weighted annual average SCC for 2014, based on SCC data collected by the Department of Agriculture, Food and the Marine and analysed by ICBF. Any suppliers with at least 9 months SCC results are considered eligible. Drinagh is well represented and especially proud that 38 of our milk suppliers have qualified for the CellCheck Milking for Quality award. The SCC range of the winners is 37-97,000 cells/ml, which is an excellent achievement. We are sure that in time this will become a prestigious and much sought-after annual award. Each winner will receive a waterproof plaque (see picture) that is designed to be mounted on the wall of their dairy or milking parlour.

Drinagh also held an awards night in Skibbereen in November to give out the CellCheck milking for quality awards to the 38 Drinagh suppliers who were in the top 500 in the country. The SCC range of the 500 winners was from 37,000 cells/ml to 97,000 cells/ml.

The 38 Drinagh award winners are listed below in alphabetical order:

The CellCheck Milking For Quality Awards is an initiative to acknowledge and recognise the excellence of Irish farmers who are currently achieving very high standards of udder health on farm, and to provide a goal for others to aim for in the future. It also gives positive feedback to the milk processors who are providing somatic cell count (SCC) data to the Department of Agriculture, under a protocol developed by AHI, ICBF and the Department. 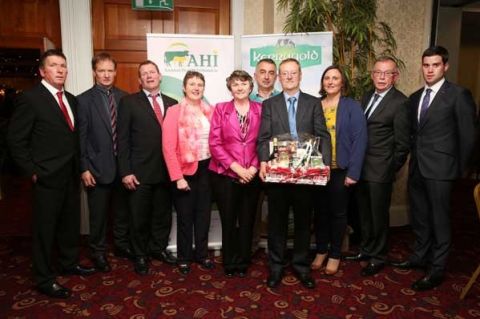 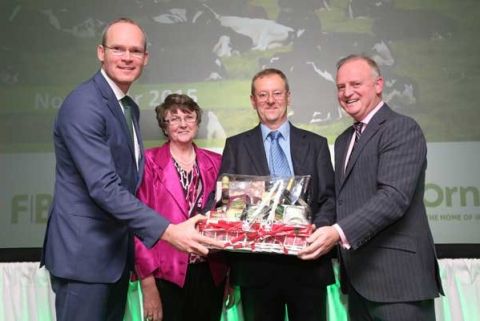 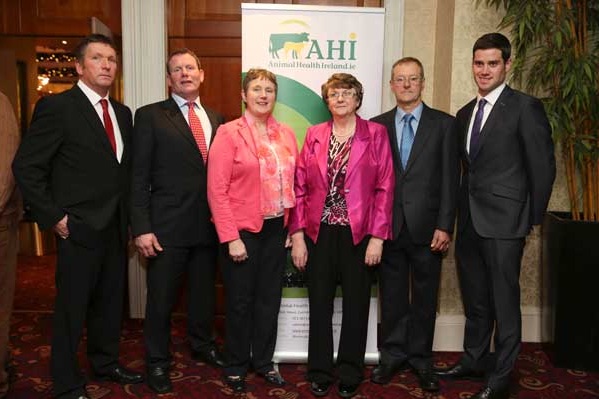