The average price paid for the month based on the average butterfat of 4.00% and protein of 3.42%, including SCC, SDAS bonuses and VAT is 31.19 cents per litre.

Milk suppliers are reminded that milk from reactor and inconclusive cows should not be offered for sale. When a reactor or inconclusive cow is disclosed on a farm, the Co-Op is informed by the Department. These animals should be isolated and their milk discarded.

The Co-Op must keep records to demonstrate the measures taken to ensure that milk from reactor or inconclusive cows is not collected. The Department may inspect a suppliers collection records for compliance with this directive.

Under EU Regulation 853/2004 the minimum milk quality standard for processing as calculated by means of a Geometric Rolling Average is:

These are minimum standards and must be strictly adhered to. When a supplier fails a geometric average for T.B.C. or S.C.C. they will be informed by letter and given the date by which they must recover or their milk cannot be collected.

Weather permitting the Drinagh Reseeding demonstration and family fun day will go ahead on Wednesday August 26th @ 1.00pm at David Finns Farm and the Ilen Rovers GAA grounds in Church Cross, located between Skibbereen and Ballydehob.

There will be four different machines working on the day and a number of experts will be speaking about the finer points of reseeding. Experts include Dr. Michael O’Donovan, Dr. Mary McEvoy, Dr. Stan Lawlor, Dave Barry and John McNamara. All areas from spraying off, fertilizer, grass seeds, cultivation methods to post emergence spraying will be discussed on the day.

In the car park of the GAA grounds there will be numerous trade stands and they will be available to offer advice and expertise on a wide range of issues. While on the GAA pitch there will be face painters and bouncy castles so it is an ideal opportunity to bring your family along for the day.

Lunch and light refreshments will be provided. 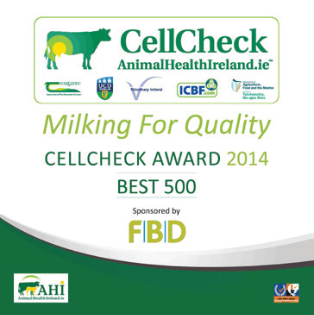 This is the second year of the CellCheck Milking for Quality awards. The award is given to the 500 milk suppliers nationally with the lowest, weighted annual average SCC for 2014, based on SCC data collected by the Department of Agriculture, Food and the Marine and analysed by ICBF. Any suppliers with at least 9 months SCC results are considered eligible. Drinagh is well represented and especially proud that 38 of our milk suppliers have qualified for the CellCheck Milking for Quality award. The SCC range of the winners is 37-97,000 cells/ml, which is an excellent achievement. We are sure that in time this will become a prestigious and much sought-after annual award. Each winner will receive a waterproof plaque (see picture) that is designed to be mounted on the wall of their dairy or milking parlour.

The 38 Drinagh award winners are listed below in alphabetical order: