In a lot of cases in Northern Ireland, anaerobic digesters are replacing cows.

Last month, the Greener Dairy Farms Group visited Northern Ireland. While there, the group visited the AFBI Hillsborough Research Centre and the Blakiston Houston Estate which both had working anaerobic digesters, the former, for research purposes and the latter, very much for commercial reasons. The Group hoped to discover how this technology might compliment a dairy farm but were surprised to discover that, in a lot of cases in Northern Ireland, anaerobic digesters were replacing cows!

What is Anaerobic Digestion? 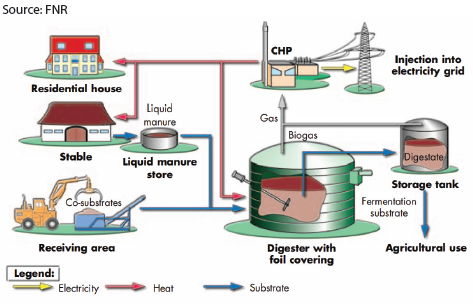 Anaerobic digestion, simply put, is the breakdown of organic waste (called substrate) in anaerobic conditions (no oxygen), to produce biogas. This biogas is made up of carbon dioxide, methane and trace amounts of other gases. It is flammable and can be burned to produce heat and electricity in a Combined Heat and Power (CHP) plant. All that remains is ‘digestate’, a sludge-like substance which is high in nutrients and can be used as a fertiliser.

At AFBI we met James Brown, a researcher at the Institute and fellow native of West Cork. James started by telling us about the renewable energy support scheme set up and run by the UK government called ROC’s (Renewable Obligation Certificates) which basically guarantees a payment of approx. 22 p per Kwh generated. This scheme is guaranteed to continue for the next 20 years. James told us that connecting to the grid could be very expensive, costing up to £200,000 in some parts of NI.

At Hillsborough the slurry from 330 cows goes to the AD at a rate of 20 tonnes /day but some surplus grass silage is also added. James told us that you could make 16 cubic meters of biogas from 1 ton of slurry but could get ten times this using 1 ton of good quality silage. Hence this digester is aimed as an on-farm facility and only runs at 60% of its capacity but matches the production time with the peak demand. This is unlike most commercial ADs which would be run at near 95% capacity.

James also told us that when slurry goes through the digester the Nitrogen becomes more available by approx. 15%, however care must be taken to ensure that digestate is applied using a trailing shoe or something similar as it can be volatilized and lost easily in this form. 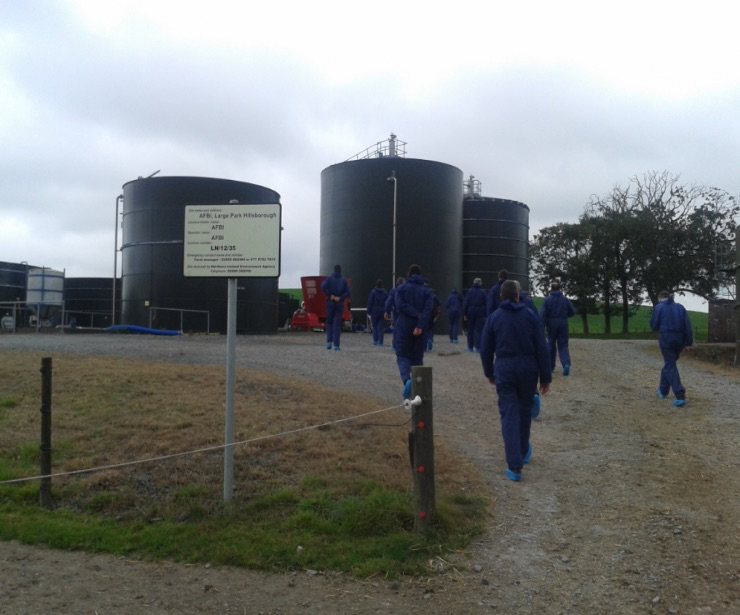 At the Blakiston Houston Estates near Dundonald, we met with Jim Torney, the AD Manager and Ivor Lorrie, the farm manager. At the estate approximately 300 cows are milked on a different site and 50 cows at the site visited. The previous year 160 cows had been milked at this site but maize was now being grown on this land to feed the digester, virtually replacing these cows. At the site there was the 500 Kw AD, a wood-chip enterprise and livery stables, both utilizing the heat from the AD. 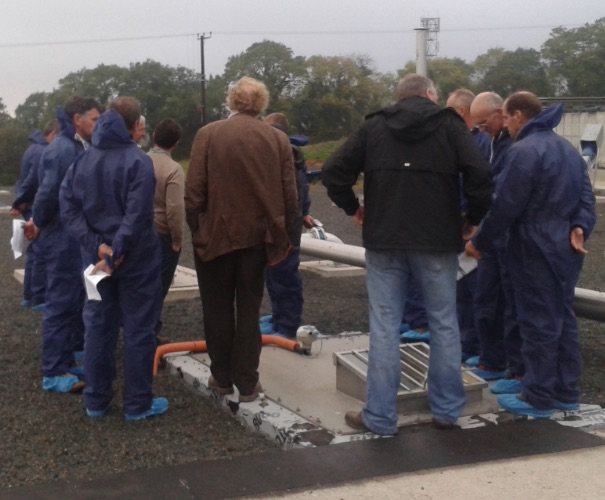 In 2010, a few sites at the bottom of the estate, were sold and capital became available so a 250Kw AD was build. This was then expanded into a 500 Kw/day Digester two years later. The design of this digester is unusual, in that it is mainly built under-ground, with only a small area being visible, blending the facility into the back-ground countryside very effectively. This is fed a mixture of maize and grass silage (approx. 40-45 ton/day) and some slurry (2000 gallons per day). All substrate is fed directly into the intake without any mixing however the silage is precision chopped to help its breakdown. (left: some of the Group standing on the 6m deep ‘ring-in-ring’ tank)

Ivor estimated that the total cost of the build was approx. £1.5 million but a grant was received from DARD in the order of approx. £200,000. He estimated that the pay-back period should be 5-7 years. This is despite the fact that there was very little utilisation of the heat produced and the amount of silage per year needed to feed the digester would be equivalent to feeding 350 cows for the year!

AD an Option on Farm?

Due to the high Governmental compensation in Northern Ireland, it is financially viable (though sustainably questionable) to use silage and other high cost feed as substrate. Here in the Republic, this is not the case. However, while there are challenges, there are also many benefits to having an on-farm AD and with ever increasing energy costs, anaerobic digesters might become a more attractive option for dairy farmers in the future, though more than likely it will be working alongside the cow and not replacing her!