We discuss ways to alleviate water supply problems on farm and outline some water and energy saving tips.

Public water charges of €240 per household were recently announced, making water a hot topic of conversation for the last few weeks. On most farms however, this will not be an issue since the majority of farms have their own domestic well. But what happens when the well runs low or dry? In the past few weeks, many areas have experienced water shortages and with the expansion of the national dairy herd expected to occur over the next few years, the pressure on the water you use is only going to increase!

In this month’s supplement we discuss what one of the Carbery Greener Dairy Farmers is doing to alleviate water supply problems on his farm and outline some water and energy saving tips that might be useful to consider.

Dealing with Water Shortages on one Greener Dairy Farm

Glen Ford farms 200 acres (115acre milking platform) and is milking 140 cows near Ballinadee. His farm is at the top of a hill and during dryer periods of the year, his farm was suffering from serious water shortages from the well supplying his land, forcing him to tap into a second well on the adjacent land. In 2012, Glen decided to build a new parlour and increase the size of the cubicle shed. To overcome the extra pressure that this would put on his water use he decided to include water harvesting into this new system.

This photo shows the 30,000 gall above-ground, mass concrete rain harvesting tank on the bottom, with a smaller second tank, 4000gall (fed from the well) on top. The upper tank supplies water toughs by gravity flow throughout the farm.

Water from the roof of three sheds was then diverted into this tank. The area of the three sheds measures approx. 13,250 ft? (1,239m?) which is large enough to fill the tank in one very heavy day of rain! The water is filtered on entry to the tank and ‘skimmers’ take the top layer of water once the tank reaches a certain level, acting both as an overflow system and secondary cleaning system.

‘Calmers’ are also used to slow the entry of water to the tank to help the settling process of water in the tank and ensure any sediment falls to the bottom. The total cost of the tank was approximately €16,000 incl. Vat though 40% of this cost was recovered through a TAMs grant. I(Currently no TAMs grants are available but it is expected that a new round of TAMS will become available over the next year)

The water is not treated with UV and no chemicals are added but water samples are frequently taken and the water is tested to ensure that there are no undesirable microbes present. This water is used only for yard wash-down, spraying and other tertiary uses.

It is not consumed by animals or used in the dairy for internal washing of the plant. 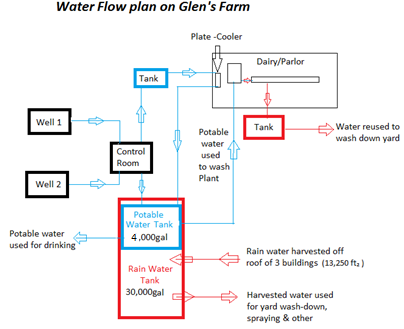 A separate smaller tank holds water from the well and is used in the plate-cooler of the plant. Water from the plate cooler is then returned to the upper tank (potable water tank) which is used to supply drinking water to livestock

Glen also plans to build another collection tank to collect and reuse the water from the plant washing for wash down of the collection yard. (The smaller red tank on the water flow plan)

Glen has been participating in the Greener Dairy Farms project since 2012. All water used throughout his farm has been metered since this time and the results so far make for very interesting reading! 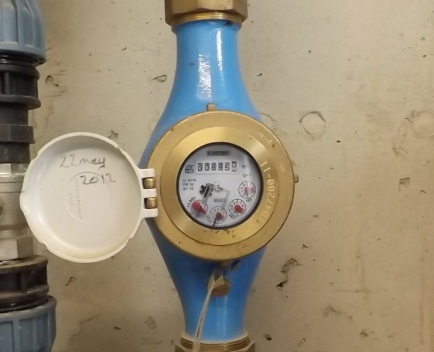 Some Tips Glen would recommend to save Water and Energy 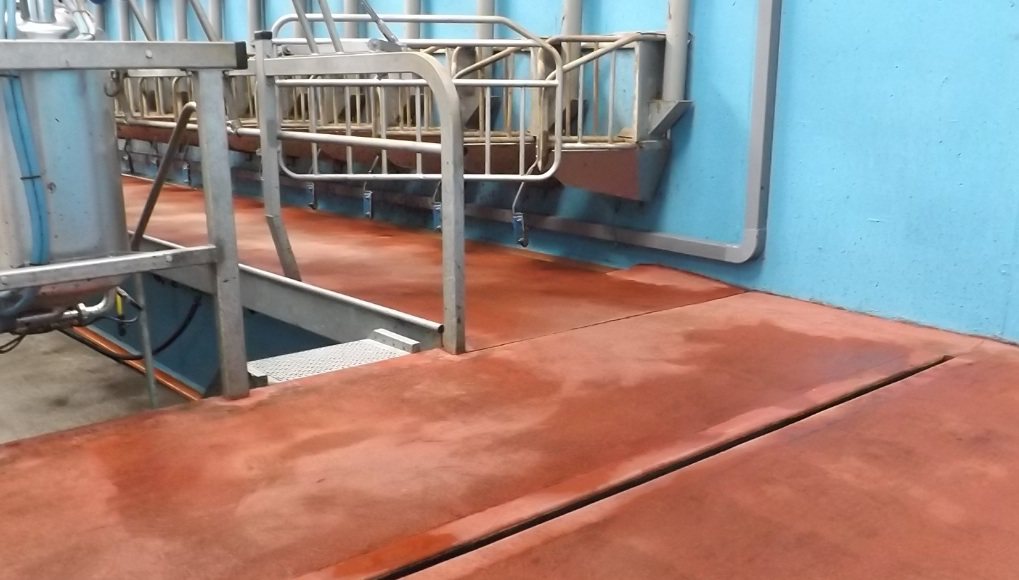