The Second Stage of the 2013/2014 Temporary Leasing Scheme is now complete. A total of 40 quota holders offered all or part of their quotas into the Scheme. This resulted in a pool of 1,572,044 litres of quota. There were 132 applicants for this quota.

The price was1 cent per litre and the relevant allocations have been added to individuals annual quotas in this month’s statements.

At a recent Board meeting the Carbery Board approved a bonus payment of 0.5 cents per litre plus VAT on 2013 milk supplies. 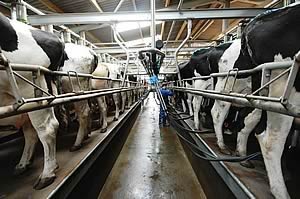 Antibiotic residue - how to avoid problems:

Super Levy on account deductions will be made on suppliers March milk accounts where the adjusted milk supply has exceeded the individual milk quota after allowing a certain leeway. This leeway will be dependent on how much the Society is over quota at the 31st March 2014.

Is Once a Day Milking a Quota Management Option

It is feasible to milk once a day until April and then revert back to twice a day at that stage.

Actions to take if changing to once a day milking:

While OAD may be suitable for some it may not suit all suppliers, see what is best for your pocket and your lifestyle.